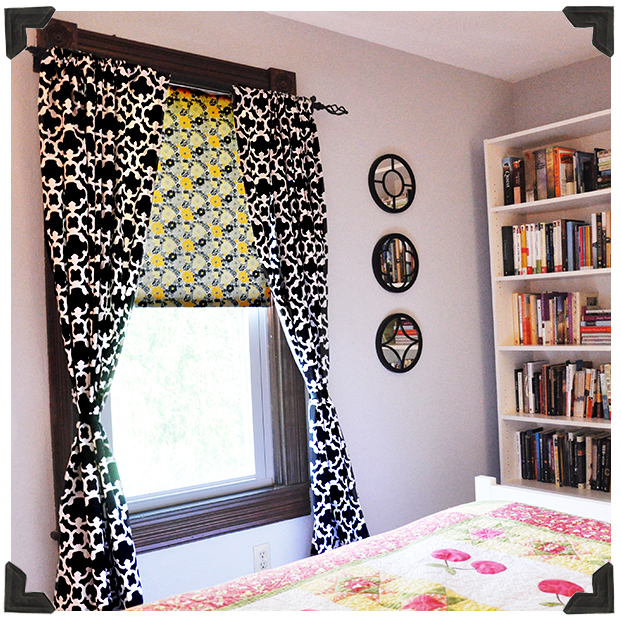 *** Join the community that jumpstarts your creativity and gets your projects finished!**

This is my second project in our bedroom makeover. Today I will be showing you how to make a fabric covered window shade. Once again, fabric comes to the rescue! Armed with some fabulous fabric and a bottle of glue, you can add some charm and personality to an otherwise completely boring window shade. (Yay! another No-Sew fabric project!)

This is a simple project- or at least it should be! The subtitle of this project should be: Sixth Time’s the Charm! I figured out lots of things you shouldn’t do when trying to cover a window shade. The first time I tried it involved a lot of trial and error, but the second time went very smoothly, once I had everything all figured out. Hopefully, I can provide you with some tips which I learned through my own experimentation so that this project will be very quick & easy for you.

The windows in this spare bedroom looked OK, but I felt like they needed a little more personality and pizzazz. 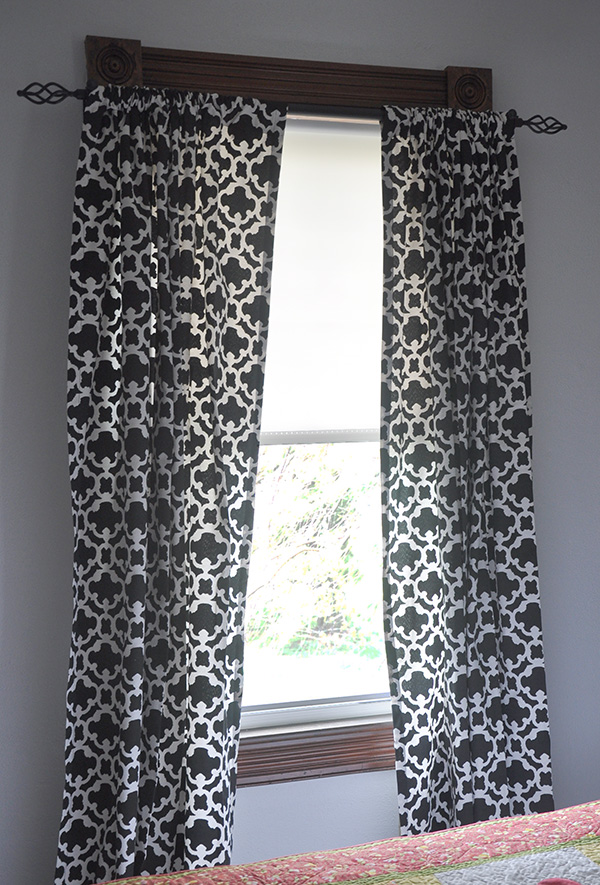 Before we begin the tutorial, let’s talk a little bit about fabric selection… The curtains that I had bought for the windows featured a large black & white geometric pattern. I needed something to brighten up the window and add some color. I also wanted something kind of soft and “curvy” to balance out the structured and “orderly” geometric pattern. Finally, the scale (in other words, the size of the pattern in the fabric) had to be small to medium in size so that it wouldn’t compete with or blend in with the large geometric pattern. What I found was a medium scaled floral print in gray, black and yellow. The floral provided the “curviness” I was looking for, the scale complemented the curtains, and the pops of yellow brightened it up. 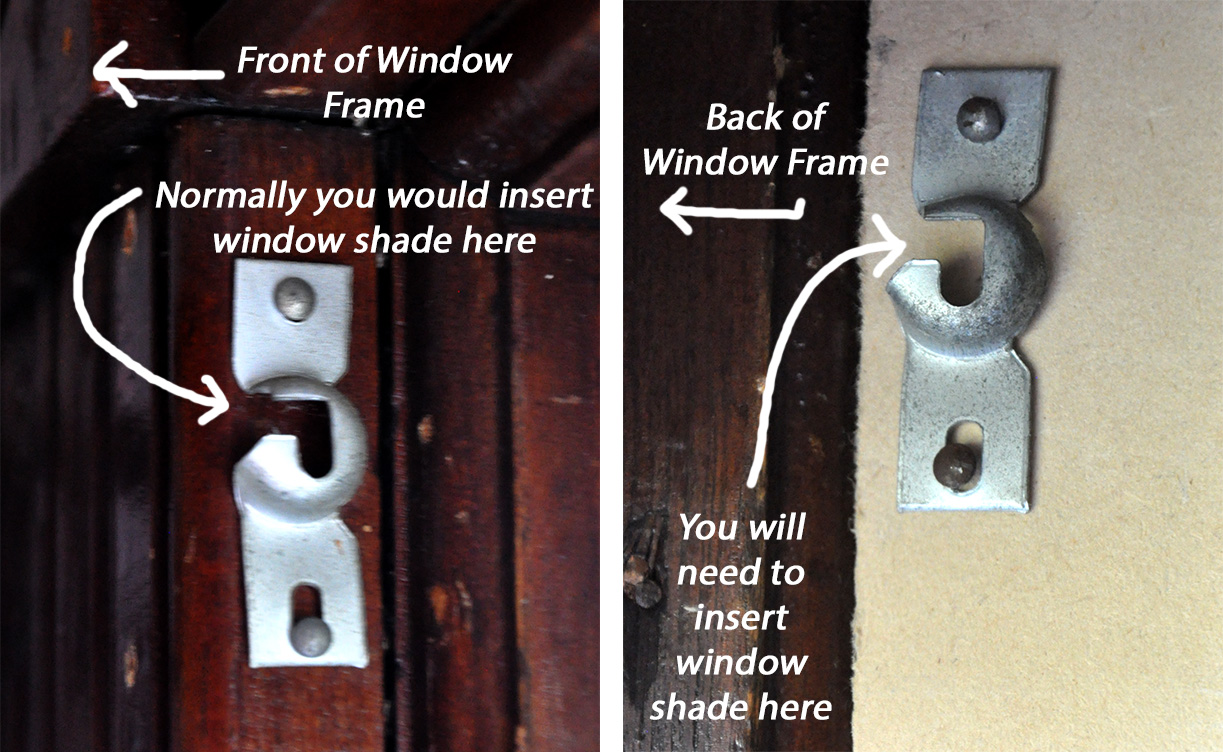 Unroll the shade. Measure the height of the inside of your window. Cut a piece of fabric that is about 2” wider than your shade, and 5” longer than the inside dimension of your window. For example, my window is 58” tall, so I cut my fabric 63” long. (My first mistake was that I cut my fabric too short, and I had to sew an extra piece on. Luckily the seam isn’t too obvious… I hope.) Press the fabric well- once it’s on the shade you won’t be able to iron it (iron + vinyl window shade= one hot melted mess.) 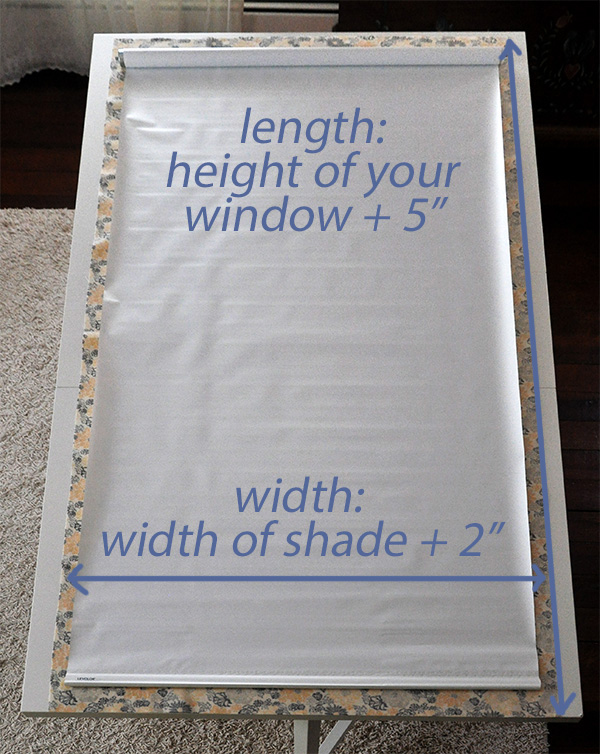 Next, we will be working with the spray adhesive. It is very important to cover your work surface with newspaper, and make sure you have the windows open for ventilation. Spray adhesive works really well for sticking stuff down, but it’s also very smelly and sticky and messy, and you don’t want it all over your table or floor… (trust me, I’ve learned the hard way during past projects.) 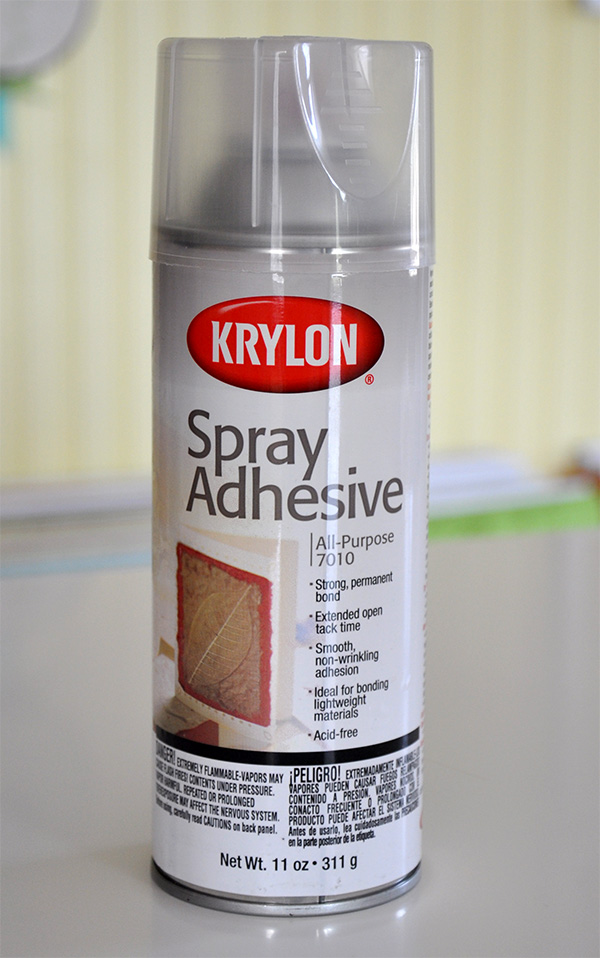 Place fabric right side down on newspaper. Place window shade on top of fabric, also with the right side down, so that the fabric is centered with about 1” of excess fabric on either side of the shade, and so that about 1 1/2” of fabric extends beyond the lower edge of the shade. 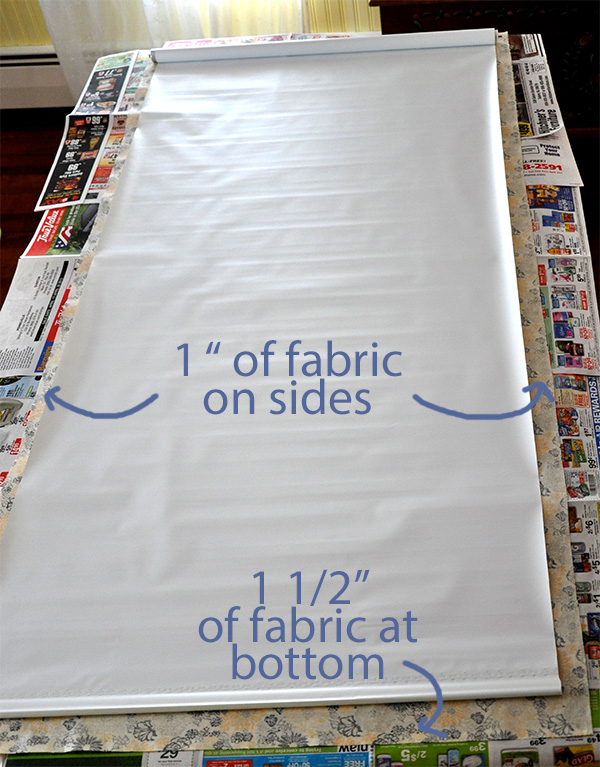 Fold up half the shade; spray wrong side of fabric with spray adhesive (be careful not to use too much- My second mistake was that I found out that too much will actually melt the vinyl.) 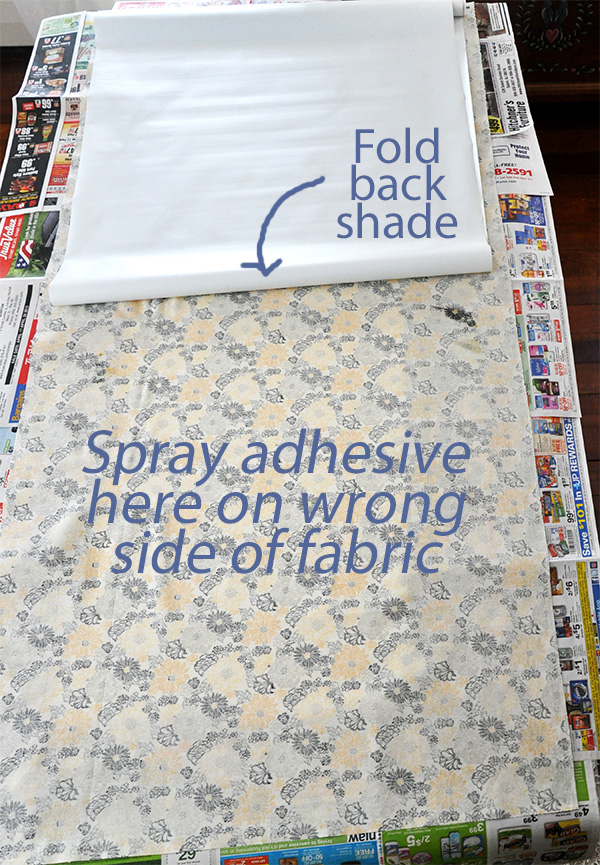 Carefully put the folded portion of the shade back on the fabric, and smooth it down with your hands, working from center toward the edges, to work out any wrinkles.

Fold back the other half of the shade and repeat. 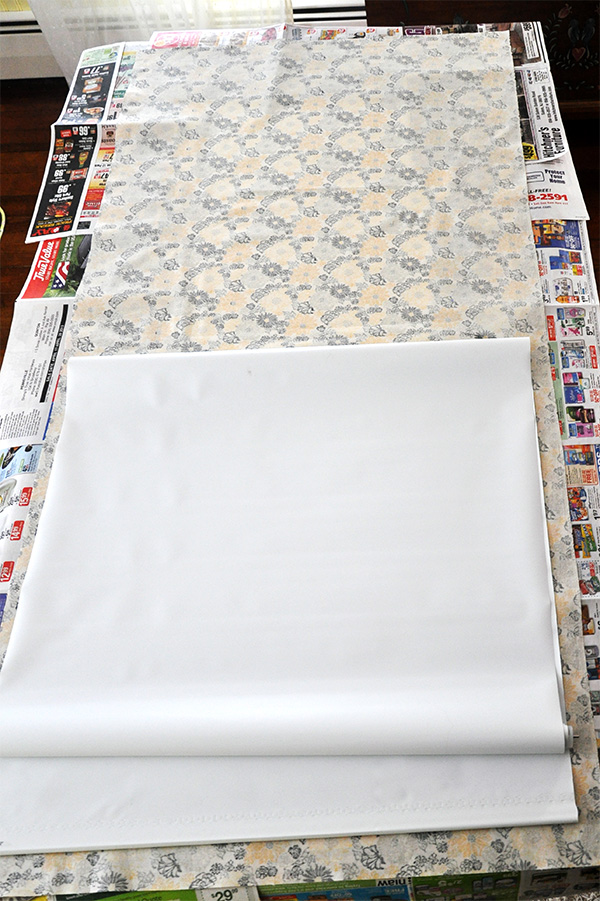 (My third mistake in covering a window shade was that during my first attempt, I did not use spray adhesive and only glued the edges. The result was that the fabric in the center of the shade kept bunching up when I tried to roll it.)

Fold top of shade over so that it is right side up. Place a line of glue under raw edge of fabric at top of shade. (There is no need to turn this edge under- it will be covered up by the rolled up shade.) 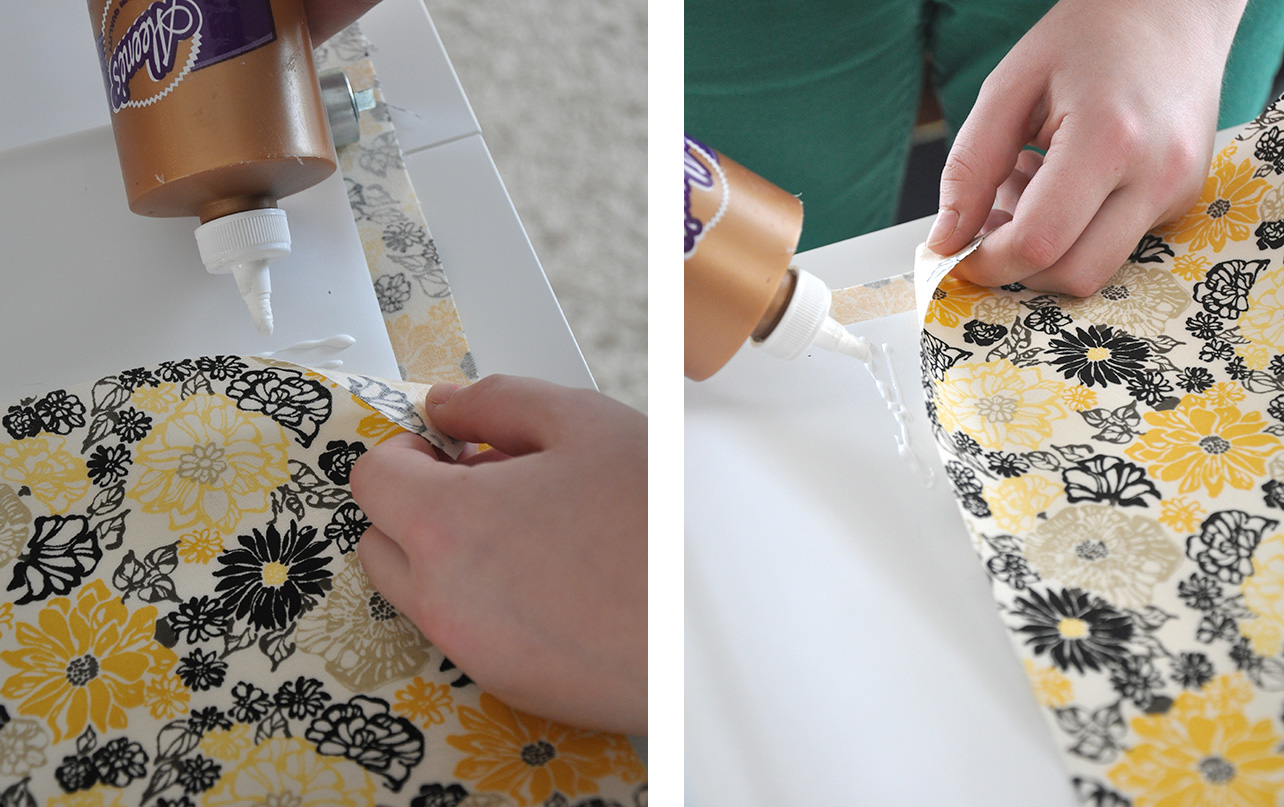 Flip shade over so that it is wrong side up again. Place a generous line of tacky glue along long side edges of fabric and fold over edge of shade. Repeat with other side.

Glue down the side edges of fabric that extend below the shade, folding them toward the center slightly. Place a line of tacky glue along bottom edge of fabric. 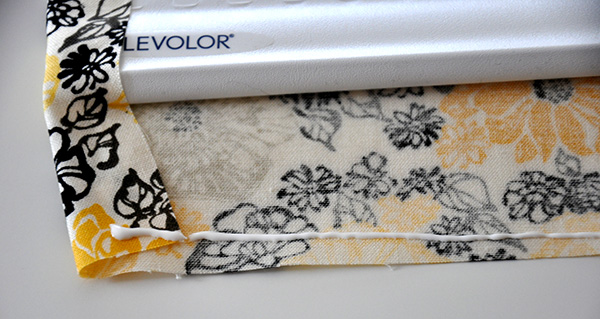 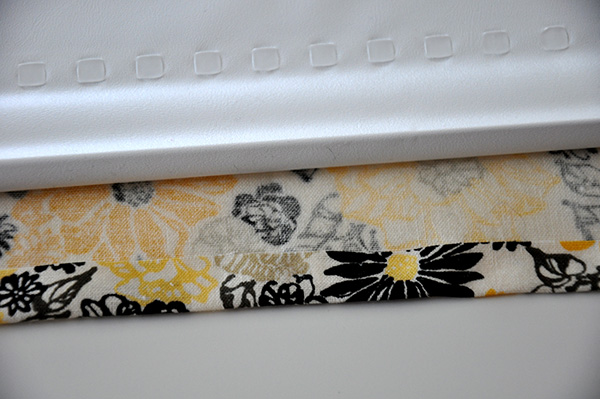 Place another line of glue along folded edge of fabric and fold over bottom edge of shade.

(My fourth mistake was that after I had glued the entire piece of fabric on, I realized I had glued it to the WRONG side of the shade. Luckily, it takes quite a while for the tacky glue to dry to the vinyl, so I was able to pull the fabric off and put it on the right side.)

Tightly roll up shade and install in window. (My fifth mistake was that I just hung the shade without rolling it back up, and then panicked when I couldn’t get the spring-y thing in the shade to roll up.)

Simple when you know what you’re doing, right? Doesn’t it add some extra interest to the window? 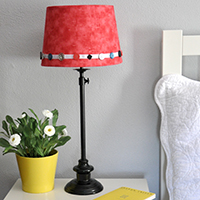 (Our first project in the bedroom makeover series was a fabric covered lampshade, embellished with ribbon and assorted buttons. Click here to see that tutorial.)

Also, if you liked this project, sign up for my FREE e-magazine and get more fabulous & easy craft, sewing & quilting projects, simple recipes, and so much more! (Yes, it’s totally free, no strings attached. And I NEVER sell or share your information.) When you sign up, you will also get a copy of my emagazine, Simple Pleasures, which is for subscribers only. 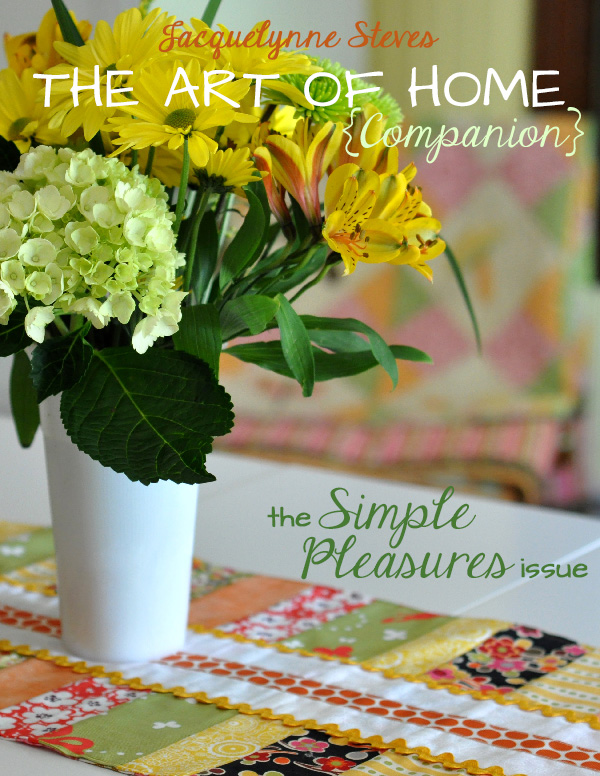 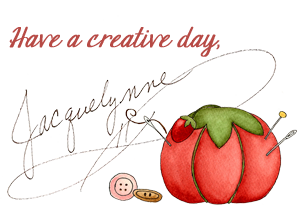